Lessons on Gratitude and Resilience from a Tricycle Ride

Lessons on Gratitude and Resilience from a Tricycle Ride

A friend was recently going through a challenging phase in her life. She confided in me that she had been through an extended period of sick leave due to an injury sustained through a fall. Lately, her manager had started behaving in a way that made her suspect they were building a case to terminate her services. Her resulting distress was affecting every aspect of her life. As a friend, I empathised with the situation she was in. It made me even more resolute about ensuring managers were trained with the EQ to handle such situations so much better.

And as a third party without the emotional attachment to the situation, it was also easier for me to see that whilst the actions of her manager and the situation she was in was undoubtedly contributing to her elevated stress levels, it was really what she was focussing on – more specifically, the subconscious meaning she was giving to the situation – that was making her emotional experience far worse than it needed to be.

“The quality of your life is a direct reflection of the quality of the questions you are asking yourself” – Anthony Robbins, “Awaken the Giant Within”

When she dwelled on how bad her manager was, and imagined the negative consequences that could eventuate, she was not appreciating that she had been able to pay the bills and had “rainy day” savings, had great skills and experience that in the worst-case scenario would help her gain re-employment much faster than others or imagining the wonderful opportunities that could arise as a result of this situation.

I shared with her this story. Some time ago, I was invited to deliver a talk on Emotional Intelligence at a conference in the Philippines. The venue was a 5-star resort called the Puerto Princesa on the beautiful island of Palawan. 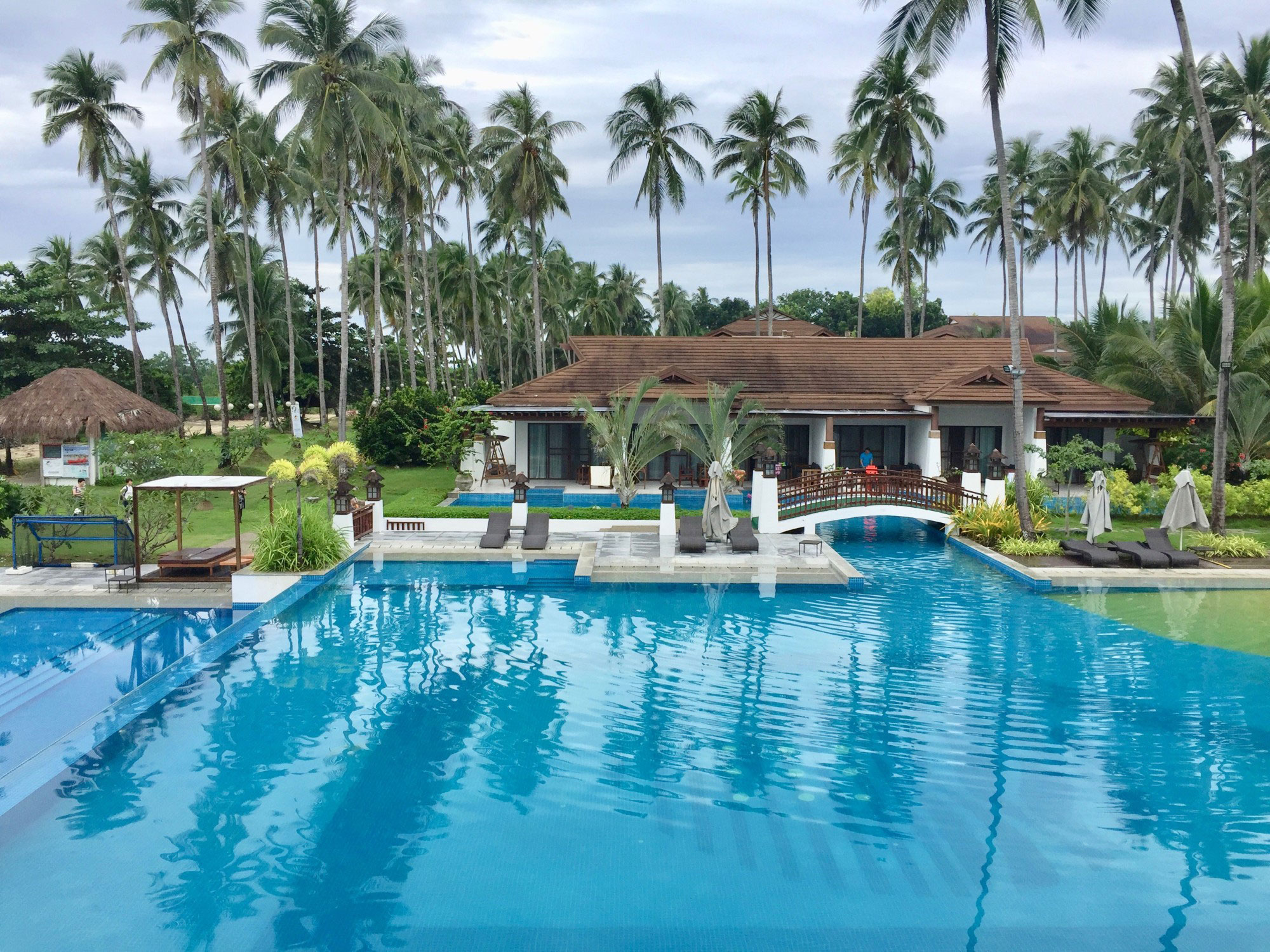 .
Our flight arrived at the city of Puerto Princesa around 06:30 that morning. We were given the VIP treatment by our wonderful hosts. A friendly driver met us at the airport and took us to the resort which simply exuded “chill”. After a delicious breakfast, we were taken up to a  luxuriously appointed suite. Frangipani petals strewn over our bed and a ribbon and balloons on the wall above cheerfully read “Welcome, Mr Siow, Dominic!” It felt surreal to be given such attention. We do not see ourselves as VIPs – actually we do, and only in the same way we consider everyone around us, regardless of background, culture or creed is uniquely special. But we come from the land Down Under where it’s ok for folks to greet their prime minister with a “G’day!” We did appreciate though that this is the way Asians show hospitality and express gratitude and we embraced it as such. 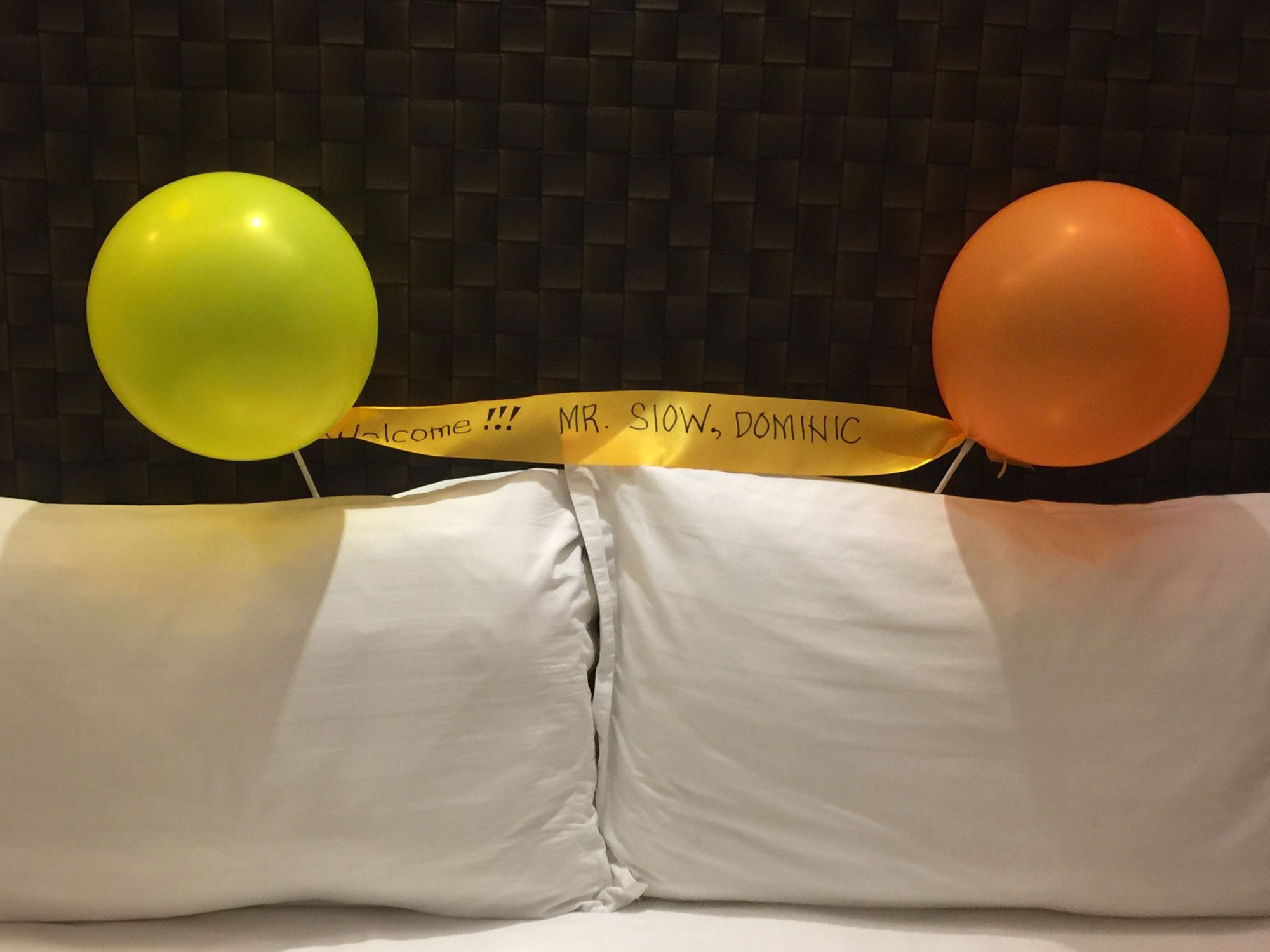 .
My keynote was scheduled to close the day. When it was my time to present, I got on stage and gave my audience my all for a good 40 minutes. As I walked off the stage to a warm ovation, a line had formed with people who wanted to have their picture taken with me. I felt bemused, humbled and grateful – at that moment, I didn’t think life could possibly get any better. 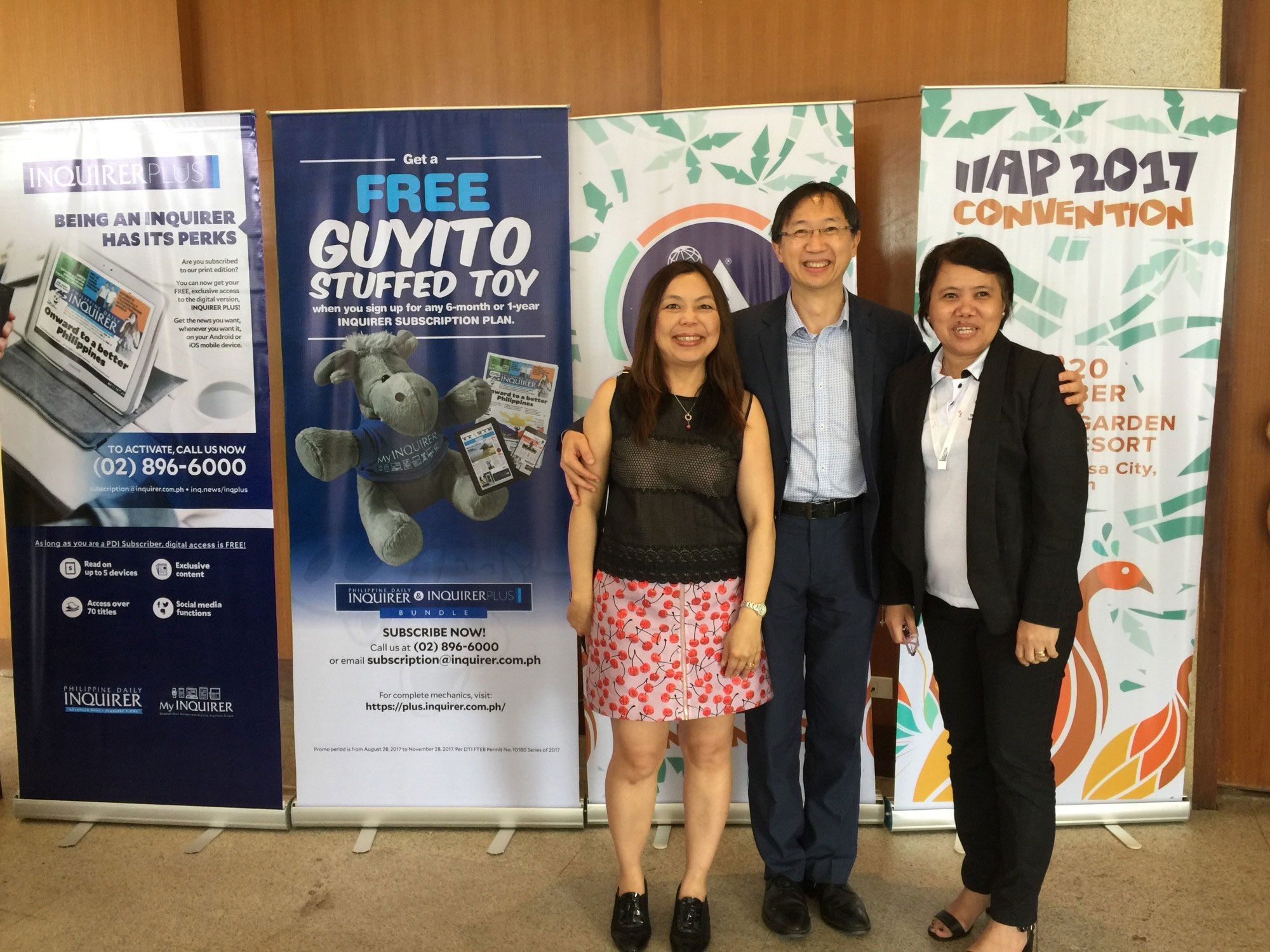 .
Job done, Sue and I dressed down to prepare ourselves for an evening to sample the unique  Palawan culture. Our wonderful hosts had suggested that a ride downtown on a tricycle (a motorcycle with a small cabin attached) should be part of our unique Palawan experience. We were greeted at the hotel lobby by a tricycle driver the hotel concierge had arranged for us. His name was Noy. We were told the tricycle could accommodate five people. Given the size of the cabin, we assumed that meant five very tiny ones. Sue and I were literally hunched over inside a cramped space.

Our tricycle “roared” up the bumpy road, navigating past a herd of goats who seemed  oblivious to what was going on. A glance at the odometer assured us that what sounded like 200 kms/hour was actually just 30 kms! I started to break the ice with Noy and asked him how his day had been. With his limited English, he hesitantly said that he had had a really good day which had started at 05:00 that morning. Being a low season for tourists, it had actually been quite quiet for him business-wise. He had had only one ride all day – taking a passenger out to town. I had been informed by the hotel that the fare for my ride downtown would be 100 pesos (AUD$2.50). My mental arithmetic told me that there was a high probability that even if Noy gave us the return ride home after dinner, that would be a tiny sum of AUD$7.50. I wondered what other work or business he did.

He nervously asked us if we had any plans for massages or tours whilst we were at Palawan as he would be happy to offer us some suggestions. I said we did not and inquired on what his fees might be if we were to engage his services to be our personal guide. His response was simply “whatever you feel you’d like to give me.” He seemed simply grateful to be gainfully of service.

At our request, he took us to a place that was popular with the locals. He insisted we should take all the time we needed and that when we were done, he would be waiting outside as the chances of him getting another fare that evening was close to none as the number of tricycles in the queue at the hotel was long.

We invited him to join us for dinner with the pretext that we wanted to sample as many different varieties of local fare as we could and did not want to have leftovers. He insisted that he had eaten and would be happy to wait outside having a cigarette. Sue was not taking no for an answer and literally dragged him in by the elbows. The poor guy was so embarrassed he turned several shades of red. We had a great meal thanks to the wonderful recommendations made by our tricycle driver turned tour guide. 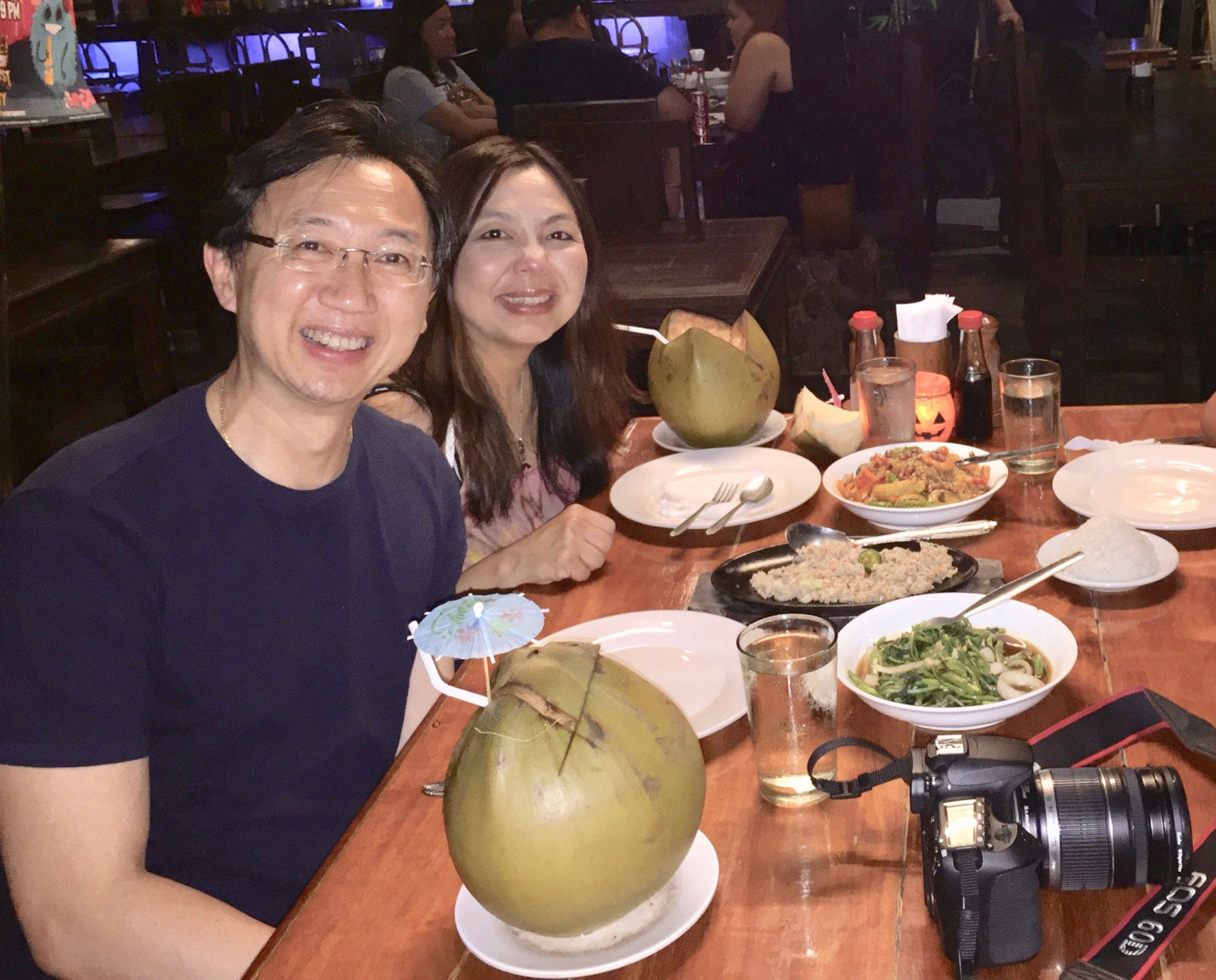 .
During the meal, I politely asked Noy if he’d mind me asking him a few personal questions to satiate my interest for learning from different cultures. He happily shared that he was a proud father of two young boys. He was not the owner of the tricycle and that it cost him a rental fee of 500 pesos and some money for fuel to run it everyday. When I asked him what else he did to make a living, his answer was “Nothing.” He further explained that in Palawan, the tricycle business is highly regulated – there just aren’t sufficient jobs for everyone – and his license only allowed him to take passengers from that particular resort to certain routes and back. Sue and I were taken aback by his response – our minds could not fathom that this man had worked all day that day and would be returning home not only not making any money but being out-of-pocket as well.

We asked him candidly how he could stay so positive having a “business” that lost him money. His one-word response was beautiful in its spontaneity – “Sacrifice.” To be able to give his two sons the chance for a good education – something he never had for himself. He proudly declared that not every day was like that particular day. There were days that were good and where he made around 700-800 pesos, bringing home approximately 250 pesos. That’s AUD$6.25 for 16 hours work, or 40 cents an hour on a good day!

All day leading up to our chance meeting with Noy – being treated like VIPs, our luxurious room, the people queueing up for signatures… had brought us great moments of pride and satisfaction. But nothing quite as profoundly meaningful as that moment with Noy – which reminded us of how fortunate we were to live the lives we lead, the blessing of living in the greatest country in the Universe, to have our education, health, beautiful children, fresh air and a vocation that truly filled us up.

At the end of my story, my friend’s eyes wallowed up in tears. She gave me a huge hug. She thanked me for sharing that story and that it’d made her realise that her “problems” were miniscule in comparison with what so many in the world actually go through every day. Just having her heart being filled with gratitude made her feel more empowered to deal with the challenges that lay ahead.

So if you are going through some challenges in your life right now that brings about fear, anxiety, hurt, even resentment, take the time out to reflect on the following:

“What’s GREAT about the situation I’m in?”

“What’s not obvious but could be GREAT about the situation?”

Take note of how this makes you feel.

Even better, make it a ritual in your life to wake up each and every day making time to reflect on the above. Imagine living a life where most of the day and in every situation where most others are feeling stressed and disempowered, you could choose to experience Gratitude instead. How would life be?

.
By the way, if you enjoyed this and haven’t already done so, do check out our book “What’s GREAT About this? How to be Resilient and Thrive through disruption and change”, which shares this and a whole lot of other practical philosophies and tools designed to help you live a life of gratitude and empowerment.

Carpe diem and make each day the most extraordinary you deserve!

About the Author: Dom Siow