A Boss Transacts. A Leader Transforms. Are you a Boss or a Leader?

A Boss Transacts. A Leader Transforms. Are you a Boss or a Leader?

.
Imagine you’re a senior manager and part of a team that’s viewed by others as “high performing” – engaged, empowered and consistently delivering great outcomes.

And you know this is in no small part because your manager is a passionate, servant leader who comes from the Harvey Firestone school of leadership:

She believes that her job is to coach and challenge her people to realise their highest potential in the course of delivering their organisation’s mission. She is both liberal with sincere praise and encouragement and equally comfortable having the courageous conversations that could help her staff be even better people.

When your people are asked what makes them come to work with a spring in their step and smile on their faces, they say it’s because they feel that what they do makes a meaningful difference. They feel like their managers believe in them, value their opinions and give them the support they need to win. And they truly enjoy working with colleagues with whom they share a strong bond. During times of adversity, people rally to find solutions, wasting no time finger-pointing. Once issues are overcome, the job isn’t done until a review is carried out to ensure positive lessons are drawn.

“It’s ok to make mistakes, not ok to not learn from them”.

Attrition is low and your staff engagement score is the benchmark others strive to reach. Part of this is in no small part due to the routine of quarterly “team building” sessions involving the entire management team. Individuals take turns to pick a place to spend a half of Friday and Saturday with. Whilst participation isn’t mandatory, most outings are attended by the vast majority because it’s so much fun. The staff who choose to participate get the Friday afternoon off to do this – and they willingly pay for the expenses out of their own pockets.

Your leader makes time to walk the “shop-floor” every day, consciously engaging with staff and to see and feel what her customers are experiencing. She knows that Julie is celebrating her 15th anniversary at work and with the help of her PA, has planned a surprise party for her later that day. She takes a few minutes to check in on Johan, knowing he has just undergone a round of chemotherapy to treat the growth in his lung and reminding him to feel comfortable asking for more time off because “health and well-being is everything”. She also sees certain areas where cleanliness levels are not up to the high standards the team is known for, takes a smartphone pic of it and sends it to the Facilities Manager with a note saying “You getting the support you need?”

This manager would be what others call a Transformational Leader.

One fine day, this manager decides to move on. She loves the place, but has had for far too long the gnawing feeling that she’s too comfortable. Authenticity is one of her highest values. She feels the need to walk the talk and stretch her wings. Uncomfortable though this may be, and much as she’ll miss the people she considers to be “family”, she feels also that her sheer presence may be stifling her charges’ opportunities to step up and grow further. In spite of feeling desperately vulnerable, she steps out in faith. After all, “leaders do what’s right, not what’s easy”. Unsurprisingly, there is no shortage of suitors in the market for her services. They recognise her potential by making offers that go beyond the range of responsibilities and rewards she’s been on.

A new boss is parachuted in. Imagine on the very first day being called into his office. No pleasantries. What you get is the “all-business” look. His first words are “I heard you were a favourite of the previous manager. Let me be direct. The past counts for nought. I don’t play that “people game” here – all that matters are results.”

How would you feel? What do you think your experience might be like for the next few months? How might that affect your performance? What about your team?

To this boss, you’re either a success or a failure – and the facts are all that count. Whatever the spreadsheets and charts say about your bottom line is what defines your year. His job is to give you clear KPIs – communicated in terms of deliverables and numbers you need to deliver. Nothing on behaviours, core values, principles or performance. He manages from his office and “by crisis”. If everything is ok, you will not hear from him. A communication from him (usually through text) means he needs something or there’s a fire to put out. Failure is not tolerated. To correct mistakes, you are expected to find out who caused the problem and to issue a warning letter.

He displays the classical traits of a Transactional leader – a style common during the Industrial Age and pre-1980s. The world view of such managers is that staff are resources that are hired and paid to lend their time, intellect and energy to get the company what it needs. Their belief is that staff come to work to make a living and respond primarily to extrinsic, “carrot-and-stick” motivation. He draws a sense of power and certainty from his position which gives him access to a batch of rewards and disincentives, however dwindling a supply that seems to be. This transactional manager thinks – “If I need more from you or like what you are giving me, I need to give you more. If you’re not giving me what I need, you will hear from me too, and you’re not going to like what you get.”

Weeks into his tenure, there is a crisis on the job floor. The person “responsible” (we’ll call him James) is one of your direct reports. James has for some time not been in your boss’ good books. “Too vocal”. “Too brash”. “Lacks attention to detail”. He calls you into his office and instructs you to issue James with a warning letter. You protest. After all, you come from the leadership school that says “the buck stops here.” When there’s success, you ensure your team gets the credit. When there’s failure, you use it as an opportunity firstly for yourself to take positive learnings and then ensure your team does the same. You believe in “Failing fast. And that there’s no failure, only the failure to learn”. But if someone has to take the fall, it’s on you. 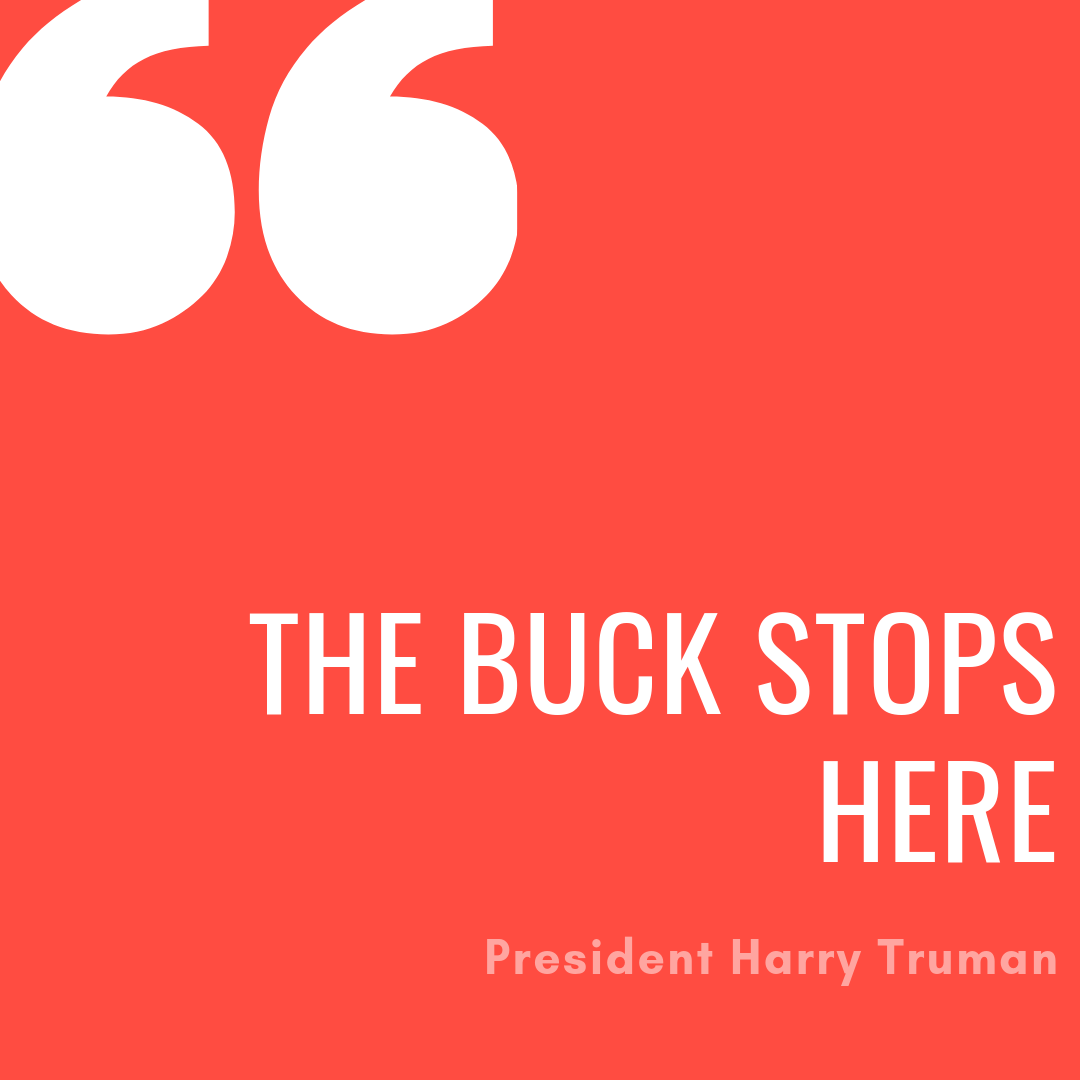 .
Weeks later, unhappy that you’ve not carried out his directive to issue James with a warning letter, you cop a warning letter. James is oblivious to this. To this day, he does not know his manager has “taken a bullet” for him.

During a time where the pace of change is accelerating and everyone is required to do even more with less, to constantly challenge themselves to learn new things and stay relevant, where there is a growing imperative to automate as much as possible, which leader would you go the extra mile for?

Which manager would you feel safe to proactively offer ideas, to challenge processes and directives when they don’t seem to make sense and that are getting in the way of even better solutions and experiences for the customers and staff?

When there is a crisis, how would people respond? What would be the overall climate at work be? How would you feel working under a Transactional Manager versus a Transformational Leader?

Does the transactional management style sound familiar to you?

It may seem so “old school” and yet, such managers are, sadly, all too prevalent to this day. Whilst it may have been somewhat effective in a past era or situations where control and predictability were imperative, the only thing certain today is VUCA (Volatility, Uncertainty, Complexity and Ambiguity). And in an age where people are struggling just to keep up with the pace of change, the last thing we need to deal with is managers who seem to make our lives so much harder. The cost not just to an organisation’s bottom line but to human lives is significant. People simply don’t perform to their optimal best under prolonged periods of fear, insecurity and feeling under-appreciated. It affects everything and everyone around them.

“The pace of change has never been this fast. And yet, it’ll never be this slow again” – President Justin Trudeau

So, with disruption being the order of the day, in our social, political and economic models, isn’t it only appropriate that we disrupt the way we lead our people?

So, are you empowering your managers with the mental conditioning and emotional competencies of Transformational Leadership? At EQ Strategist, we come across scenarios like the above far too often through our journey as coaches. It makes us more determined than ever to help elevate the consciousness of organisations – of the need and opportunity to turn managers into leaders and to recreate the workplace as one where people come to not only make a living, but to fulfil their highest potential.