Six Principles and Strategies for Influencing Without Authority

Six Principles and Strategies for Influencing Without Authority

“People will dutifully obey a person in authority. But they’ll passionately follow a leader of influence.”

To get the job done, most roles today involve having to influence without the benefit of positional authority. With flatter organisational structures, the demand for greater cross-function collaboration and the need to do more with less, your ability to influence your manager, staff, peers, colleagues, clients, suppliers and other stakeholders will determine how effective you are and how much you enjoy what you do.

Here are six key principles and strategies for influencing without authority.

People are more willing to follow those who they know have their interests at heart. Be interested first in what’s going to make your stakeholders win before you ask for what you need from them. Make time to meet up with them and get answers to questions like “What’s going to make you successful?”

In the words of Zig Ziglar, “You can have anything you want if you help enough other people get what they want.”

People are more likely to be influenced by someone they like. Some people are naturally more likeable than others. Being someone who was at one time lacking in social confidence, I’ve learned that just like learning to ride a bike takes practice, so does being likeable.

.
This means that even if you’re a born introvert and socialising doesn’t come naturally to you, being a people person can be learned and people will naturally come to like you.

Likeable people smile a lot, project warmth and use body language that conveys, “I’m open and approachable”. Someone once said to me, “Your smile is a window to your heart.”

Why would someone go out of their way to help you or follow your lead if it isn’t obvious to them what the tangible rewards might be? Affection helps and so does trust. To earn trust, do what you say you’ll do, faster, quicker and better than they expected.

A good friend of mine who’d just accepted a position as a Project Scheduler sought my advice the other day. Part of his new role involved getting contractors to complete and send him timesheets every week. Week after week, he found it hard to get their cooperation. They’d ignore his emails and phone requests. This was not just making him look bad but any excitement he had with his new role was fast fading.

I suggested to him that “resistance is a sign of an absence of rapport” and to work on building trust by being sincerely interested in them and their concerns. He took my advice, bought some coffees, took it to them, introduced himself and then said something along these lines:

Quiz – “What’s the most popular radio station in the universe?” Answer “WII FM”. WIIFM stands for “What’s In It For Me?” People are motivated by self-interest. When asking for something, always tell them how them giving you what you want will benefit them.

.
“Guys, I’m new to this job and just wanted to say hello. I know what a pain completing timesheets can be and wanted to meet up to get your views on how to make that as painless as possible for you. Quite apart from me getting my job done, I’m keen to ensure that you guys get paid on time. Management has issued this new policy because there is a greater requirement these days for transparency on how approved budget is being spent. How can I make this as easy as possible for you without having to be a “nag”?”

A couple of weeks later, he told me that spending a few bucks on the coffees and those 30 minutes was the best investment he’d ever made. Not only was he getting the timesheets on time, he formed a good relationship with some great guys.

5. Be empathetic and a good listener.

When dealing with someone who’s negative, giving them space to air their grievances can be a powerful “resistance buster”. Often, their negativity is a sign they’re not feeling very appreciated or secure. Showing empathy can often turn them around.

.
You don’t have to agree with what they say. Give them the right to feel how they feel. Practice acknowledging feelings. For instance, “You seem incredibly frustrated about this”.

Like being a people person, being an empathetic listener is a skill you can develop—and starting goes way beyond just saying “Uh-huh”, “that’s right” or “okay” every few minutes or so. The key lies in doing your best to understand why the person feels the way they do, and to offer reassurance that person can trust you with their feelings.

This doesn’t mean that you have to keep responding to everything the person says. Sometimes your attentive silence can do far more than several “Mm-hmm’s”. When the time is right, try giving a recap of what the person said, even if it means using the some of same words, to show that you were listening and that you understand.

You can also try asking some follow-up questions, but whatever you do, don’t start giving advice (unless the person specifically asks for it) or shift the conversation to yourself. Remember that the point of empathetic listening is helping the other person and not hearing yourself talk.

6. Communicate outcomes instead of actions.

Tell them what you want instead of what to do. People do not like being told what to do but they generally respect people who make them feel empowered.

Instead of: “Could you arrange for a desk and phone to be setup in this corner of the room?”

Say: “We have a new colleague arriving this afternoon. I’d like to make that person feel welcome and be able to be productive as soon as possible. This means for instance that we’ll need some furniture and a phone for her. Can you could help with this?” 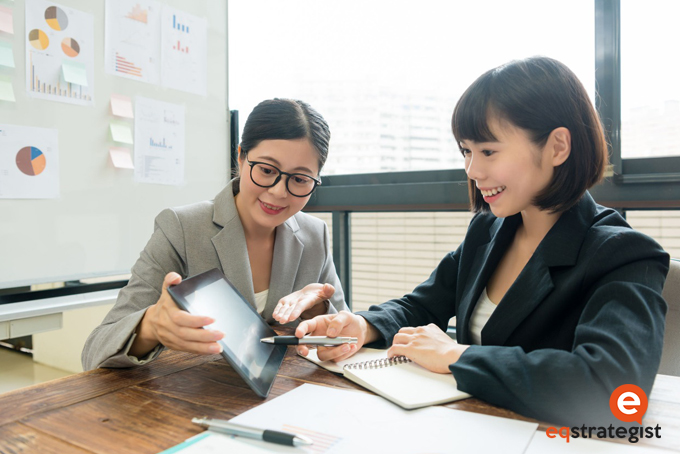 .
In summary, people will do only so much under authority, but they’ll move mountains under respect. To earn their respect, be sincere about making them successful, be friendly and empathetic, create a safe space for them to get to know you better, empower them and help them win.

Once you learn to influence without authority, you’re well on your way to a position of authority—and when that time comes, you’ll have recreated yourself as a high EQ leader. Get practical and effective assistance on your journey towards being the best you can be, when you get in touch with us at EQ Strategist, today.

To your ongoing success,

About the Author: Info