How Caring Authentically Elevates Staff Engagement and Makes You a Leader

How Caring Authentically Elevates Staff Engagement and Makes You a Leader

.
In times of change and disruption, one of the critical assets you as a manager must have for your staff to willingly follow your lead is Trust. That you are not just competent in what you do (through a clearly articulated vision, well-considered strategy and a reputation for walking the talk) but that you also have their backs! Trust is not something one commands from a position of authority, but one that is earned through consistent acts of personal accountability and genuine expressions of appreciation, care and empathy.

Working as a culture transformation, leadership, collaboration and resilience coach is one of most fulfilling of vocations. When it’s all said and done one day though, it’ll not be the number of workshops I’ve run, companies trained, books written or countries travelled that matter most, but the people I’ve gotten to meet and grow with.

.
“What you leave behind is not what is engraved in stone monuments, but what is woven into the lives of others” – Pericles

.
One of these wonderful people is a change leader by the name of How Chong Peng. How is chief-of-staff at Globalfoundries Singapore, a company EQ Strategist has been blessed to journey with since 2007! A few Friday evenings ago in March, he sent me a picture he had taken with Mani, who used to be one of the exceptional security staff in the company.  For as long as I can remember, Mani has manned the boom-gate at the main entrance to the Woodlands manufacturing facility.

.
How had learned that it was Mani’s last day and was being posted to another location. He went out to the guardhouse that day specifically to thank Mani for his wonderful years of service and gave him an “ang-pow” (a red packet with a monetary gift) as an expression of his personal gratitude for his many years of wonderful service and friendship. Not only that, How had passed the news of Mani’s departure around the senior leadership team of this wonderful organisation, many of whom made it a point to drop in to say goodbye to a great colleague.

.
Receiving How’s note made a great week even more exceptional. I have always appreciated Mani. I remember my very first encounter with him. Arriving in my taxi, I saw a portly, cheery character with a clipboard and sign-in sheet who greeted me with a huge smile and cheery “how are you sir?”. It struck me that this man, whose role many would consider to not only be “mundane” and trying, having to stand for hours under the hot sun, would be able to maintain such a positive disposition. 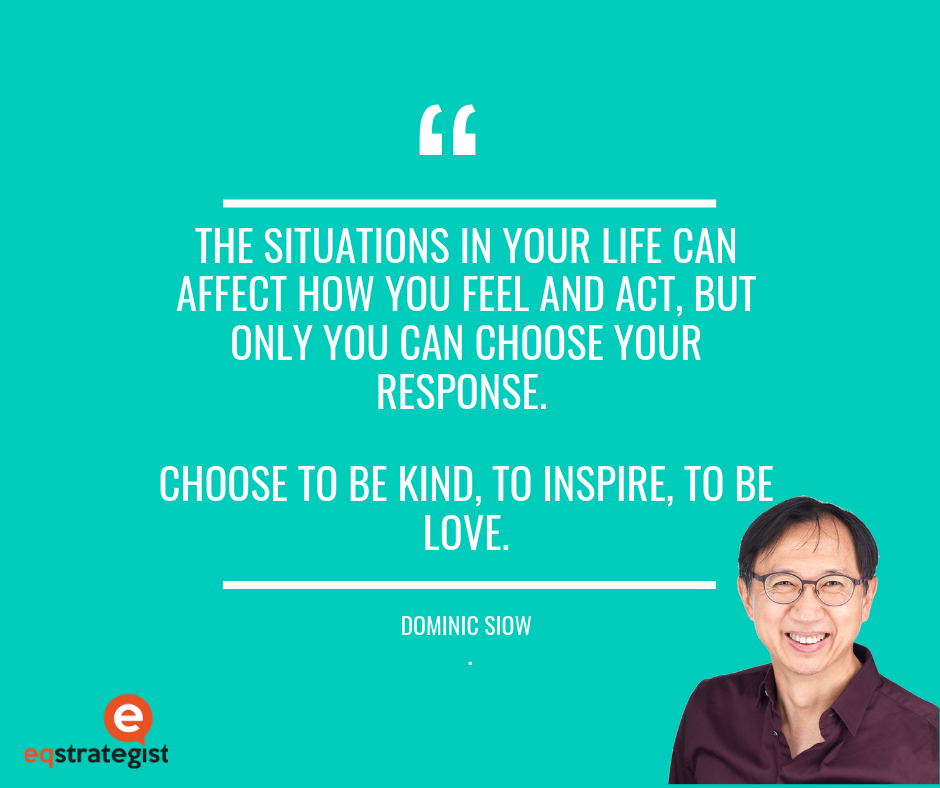 .
I believe that to be leader, one should not only celebrate achievement, but to express genuine appreciation for those who demonstrate the right behaviours and effort. So I stuck my neck out of the window, gave him a huge grin, motioned for him to come closer, peered into his eyes and said “Mani! Thanks for making my day. Know that your positive attitude is noticed by and makes a difference to everyone who sees you! I know you may not often get this from the others, but I truly appreciate you for keeping everyone here at the plant – all 7000+ souls who work so hard and like you, have families to get home to every day – safe through your diligent efforts.” All I got was stunned silence …. and tears welling up in his eyes. I could tell he truly appreciated my gesture and from that moment on, we formed a special bond. Since then, every time he’d see me arriving from a distance, he’d raise his hands to greet me with genuine enthusiasm.

.
I can only imagine how he must have felt that very last day at Globalfoundries Singapore. A magic moment created by transformational leaders who cared authentically. Sad and grateful I’m sure and I do hope, also inspired about his next adventure. Isn’t that a great way to end one phase of one’s journey? What do you think his last memory of How, Globalfoundries and the wonderful people there is? If there was a job opening at this company, how inclined might Mani be to encourage his family and friends to apply? Would Mani himself consider returning if an opportunity arose? What would his performance be like? Would he need a lot of managing?

I’m sure what How did would also not have been lost on those fortunate to bear witness to this exchange. Would this act not inspire even greater loyalty in others?

Contrast this with the story of one of my dear friends who retired three years ago, having served her company for 25 years!

She had risen to the ranks of senior HR partner at a major multinational IT organisation. She was 57 when she retired. When I asked her what drove her decision, she said that she really had had enough, and that three years later, she still felt burnt out. She told me how she’d received that call three years ago – to be told that her Mum had passed away. Life at work today can often feel like hurtling around a grand-prix race track – we never seem to have enough time. And yet, leaders make time to have those pit-stop moments, to pause, reflect, sharpen the saw, recharge and drive ahead.

.
“Whenever you find yourself on the side of the majority, it is time to pause and reflect” – Mark Twain

.
She took two weeks’ leave to give her mother a fitting farewell. During that enforced “pit-stop”, all she felt was a deep sense of disappointment at her organisation’s apathy – there were no flowers, note of acknowledgement, phone call or email from her manager. Just silence. She felt like for years, people had got so caught up chasing targets and meeting KPIs that they had lost sight of what they said truly mattered most – their people. That feeling of being let-down caused her to not only resign, but to retire.

.
I was saddened to learn about this. “Relieved that it’s all over” is certainly not how anyone should feel at the end of a journey that’s consumed so much of their life. That day, her  organisation lost a loyal servant with many years of great experience and expertise. It’ll not surprise me to know that her manager does not even realise that the last memory one of her key staff has of her company and leadership is – “they just don’t care”. I can only hope that the exit interview was constructive and that this organisation has taken positive steps to work on its culture.

Imagine instead if her manager had taken but a few minutes to call her to express her sadness, support and reassure her that she could and should totally focus on grieving and spending time with her loved ones. How might she have felt? How would she respond when she came back to work?

A key trait of Transformational Leaders is what’s termed “Idealised Influence”. Idealized influence means that followers identify with and want to emulate the leader who is trusted and respected, maintains high standards, and is considered to have power because of who she is rather than what position she holds.

.
“The key to successful leadership today is influence, not authority” – Ken Blanchard

.
To be a Transformational Leader, the most basic and essential of traits is to truly care for your staff’s personal well-being and to see her beyond a job title or ID. And to care alone is not enough. Your ability to express this through word and deed and to ultimately make your staff feel cared for is what helps you influence and have your team willingly go the extra mile for you, to forgive the inevitable mistakes we’ll make along the way and to drive forward even though the path remains unclear simply because they’re convinced you always have the team’s best interests at heart. 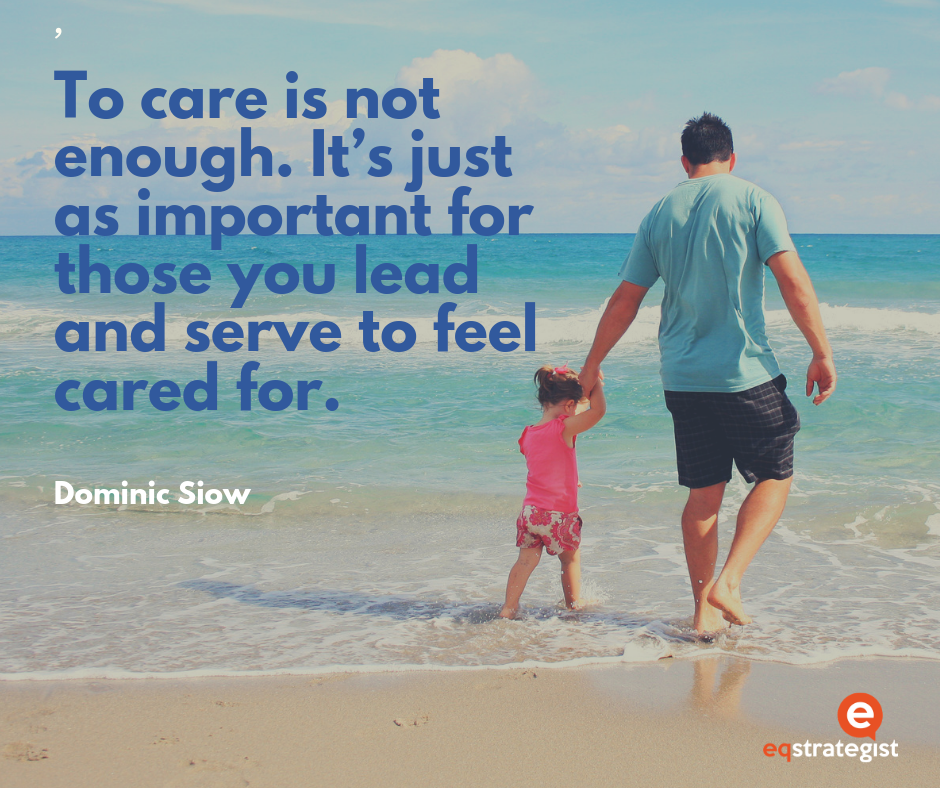 .
Stories like this make Team EQ Strategist even more passionate about our work. I’ve learned that whilst love is truly the source of our being, both caring and coming across as caring is a trait that can be re-learned!

To find out more about our work on culture transformation and developing high EQ leaders, please visit:

Who can you reach out to proactively connect with today and to simply show you care? Who can you express appreciation for?

About the Author: Sue Siow